Like most software, Plone changes over time. These changes are reflected in different releases of Plone.

The release-schedule specifies, which versions are supported and for how long.

Bug fixes and small new features are added. Around the end of maintenance support, a final release will be done.

Plone security hotfixes will be made available for this series. For more information, see the security update policy.

Plone intends to provide stable releases (for example, 5.2.8 is a stable release of the 5.2.x series). Only bugfixes and changes that extend or improve an existing feature—as long as they don't break anything—make it into a bugfix release.

What's in a Plone version?#

In fact, it is even more complicated, because Plone consists of about 250 separate Python packages, all of which have their own versions and history. Many of these Python packages are developed and released "inside" the Plone and Zope projects, but Plone also depends on more generic Python packages developed by third parties. A Plone release such as Plone 5.2.6 (https://dist.plone.org/release/5.2.6/) pins all of these packages to a specific version, which altogether comprise a Plone version.

Each Plone version has a detailed change log that lists all changes that made it into that release, as compared to the previous release. For an example see https://plone.org/download/releases/5.2.8.

You can overrride the version of individual packages if a newer version has a feature or bugfix that you need. Then you may be using Plone version 5.2.6, but plone.app.contenttype = 2.2.2 instead of 2.2.2 with its version pinned for Plone 5.2.6. You can do that, but at your own risk! Only the officially pinned version are tested with each other.

Why do we need to upgrade?#

If you want to use a new feature or bugfix that your version does not yet have, then you need to upgrade.

That could be as simple as changing an extends in your buildout.

Would become the following.

After changing the versions files in buildout, you also need to run buildout, which reads the versions and downloads the updated packages from PyPI into your environment.

But you not only need to change the version of Plone you use, but you also need to update the database.

Since a Plone site stores content and settings in its database, these may need to be modified to reflect changes in the logic or configuration of Plone. This is done by upgrade steps, or code that runs and updates the database to work with the new version.

Changing from 5.2.6 to 5.2.9 is usually not a migration, but an update or upgrade, more specifically a bugfix update.

Your could use the following:

Adding a Hotfix to Plone without changing anything else.

Bugfix version changes, for example, 5.2.6 to 5.2.9 without additional changes.

Bugfix or minor version change that gives you at least one new feature. For example, 5.2.6 to 5.2.9, while adding collective.easyform, or even 5.0.8 to 5.1.7 when you don't change anything else.

This includes the design, graphical appearance or theme, frontend libraries (such as Bootstrap), and content or content structure.

The process of getting a database from one version of Plone to another version.

To make it even more confusing people use Major Update or Major Upgrade when in fact they are doing a Relaunch.

Good communication to manage expectations and imaginations is key! Make sure that everyone knows what you are planning to do, no matter what you call it.

It can help to approach every non-trivial upgrade as a relaunch. It is usually much easier to scale down expectations than up.

Arguing for a required switch of a Python 2.7 installation of Plone 5.2.6 to Python 3 (while staying on 5.2.6) is hard without taking the opportunity to change the mobile navigation.

Suddenly it's a relaunch and everyone is excited.

Dealing with major changes in Plone#

In the history of Plone so far, there were three major changes:

Each of these major changes requires special treatment during an upgrade that makes upgrading much more complex.

With Plone 5.0 the default framework for content types switched from Archetypes to Dexterity.

Up through Plone 5.2.x, there is a built-in migration from Archetypes to Dexterity, but it only supports Python 2. See Migration in the latest stable release of plone.app.contenttypes for details on the migration of custom and default content types to Dexterity.

See the upgrade guides Migrating Plone 5.2 to Python 3 and Migrate a ZODB from Python 2.7 to Python 3 for detailed information on these steps.

Using collective.exportimport, you can export content from Python 2 and import it in Python 3.

Plone 6.0 comes with a new default frontend called Volto. It is written in React, and expects some subtle but important changes.

See Migrating from Plone Classic UI to Volto for the specific migration steps.

To make these major changes easier to manage, Plone provides a transition for all of these scenarios:

Another hurdle for upgrades between major version is that they have different themes:

What is a complex migration?#

An in-place migration means the content and settings of a Plone installation are being updated while Plone is running.

In-place migrations can get very complex if you need to deal with multiple important changes. 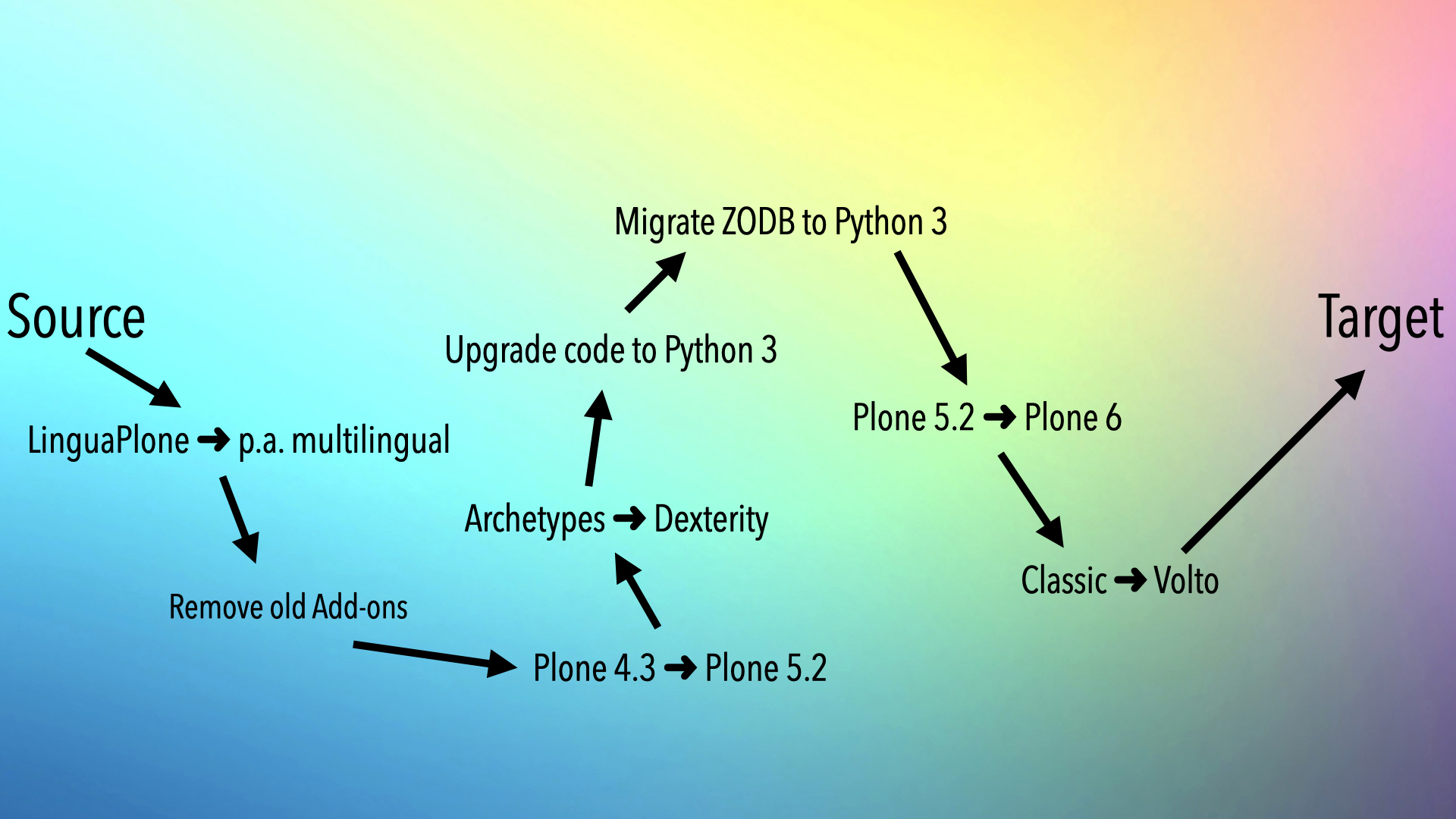 These are discussed in the chapter In-place migrations.

This means you export all content and settings that you want to keep from an old site and import it into an empty, new site.

In export-import migrations, you can shortcut most of the individual steps required for complex in-place migrations: 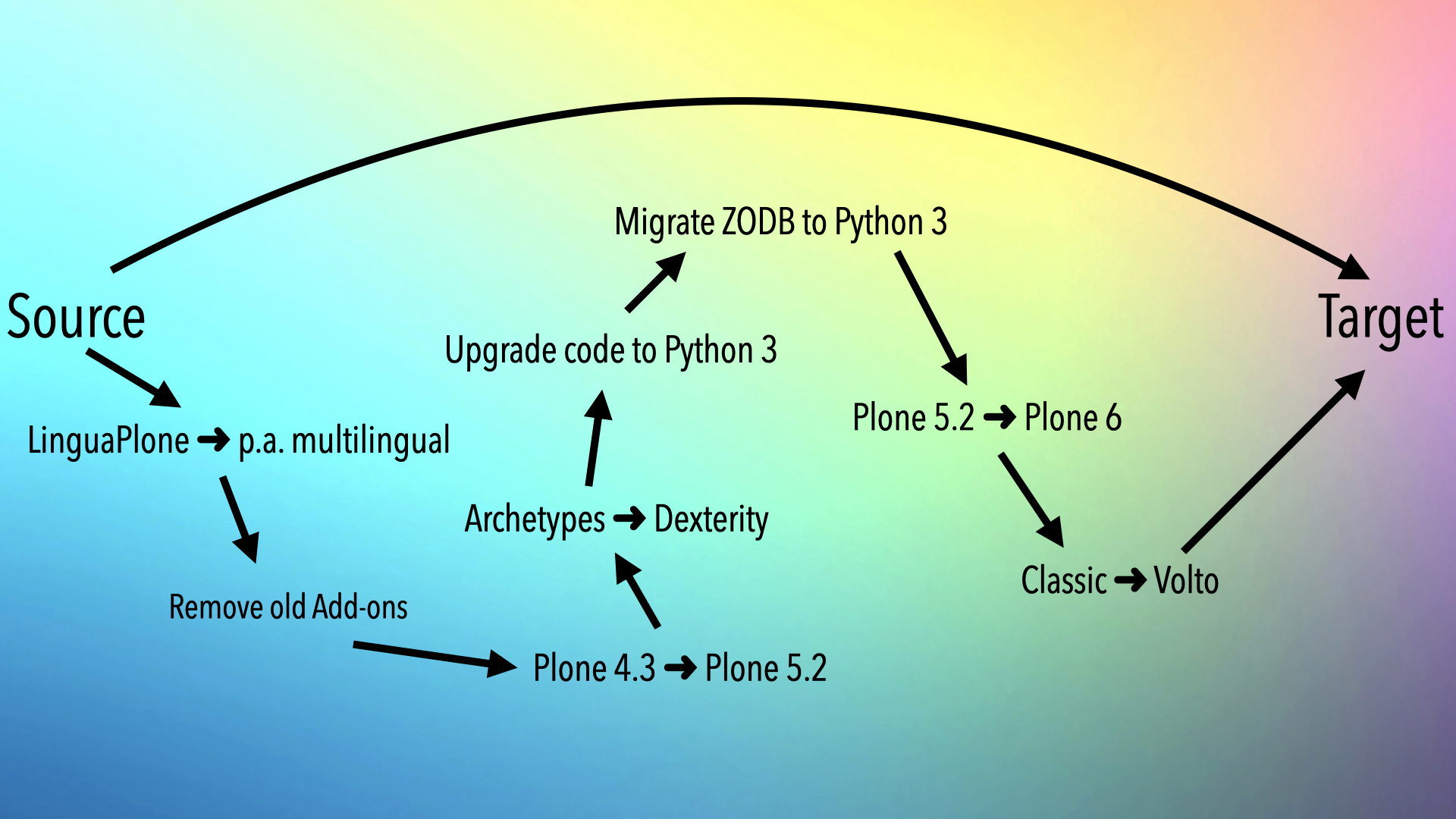 These are discussed in the chapter Migrating with collective.exportimport

Dealing with problems and bugs#