During this training we have seen how to test different parts of Plone and we have reviewed different testing techniques.

In this final chapter, we are going to see how to configure add-ons for continuous integration (CI).

Continuous integration is the practice of merging in small code changes frequently, rather than merging in a large change at the end of a development cycle.

Each merge should be checked to avoid problems and regression errors.

With version control platforms, this means that, for every code push, all tests should be run and need to pass before a feature is merged.

Bitbucket and GitLab provide internal CI tools. GitHub doesn't provide a CI tool, but Travis CI can be enabled for a GitHub repository.

Each system has its own configuration syntax, but they work in the same way:

Configuring builds to run parallel jobs is useful when our package needs to maintain compatibility with several Plone or Python versions. Manually testing each change for each version of Plone or Python would be painful and time consuming.

If we look closer at *.cfg files created by plonecli, we can see that they are built in a way that it's possible to run buildouts for:

Configuration files for CI created by plonecli are built to use the correct buildout for each Plone version.

Because collective and plone repositories are on GitHub, the most commonly used CI service for collective add-ons is Travis CI.

Let's see how to enable our testing package on Travis.

First, we need to create a repository on GitHub. We don't need to push code to it yet.

Then we need a Travis CI account: go to https://www.travis-ci.com/ and signup with your GitHub credentials.

If we go to the settings control panel, we can see a list of organizations and repositories for which we can enable Travis. We could also see our newly created repository and we can enable it. 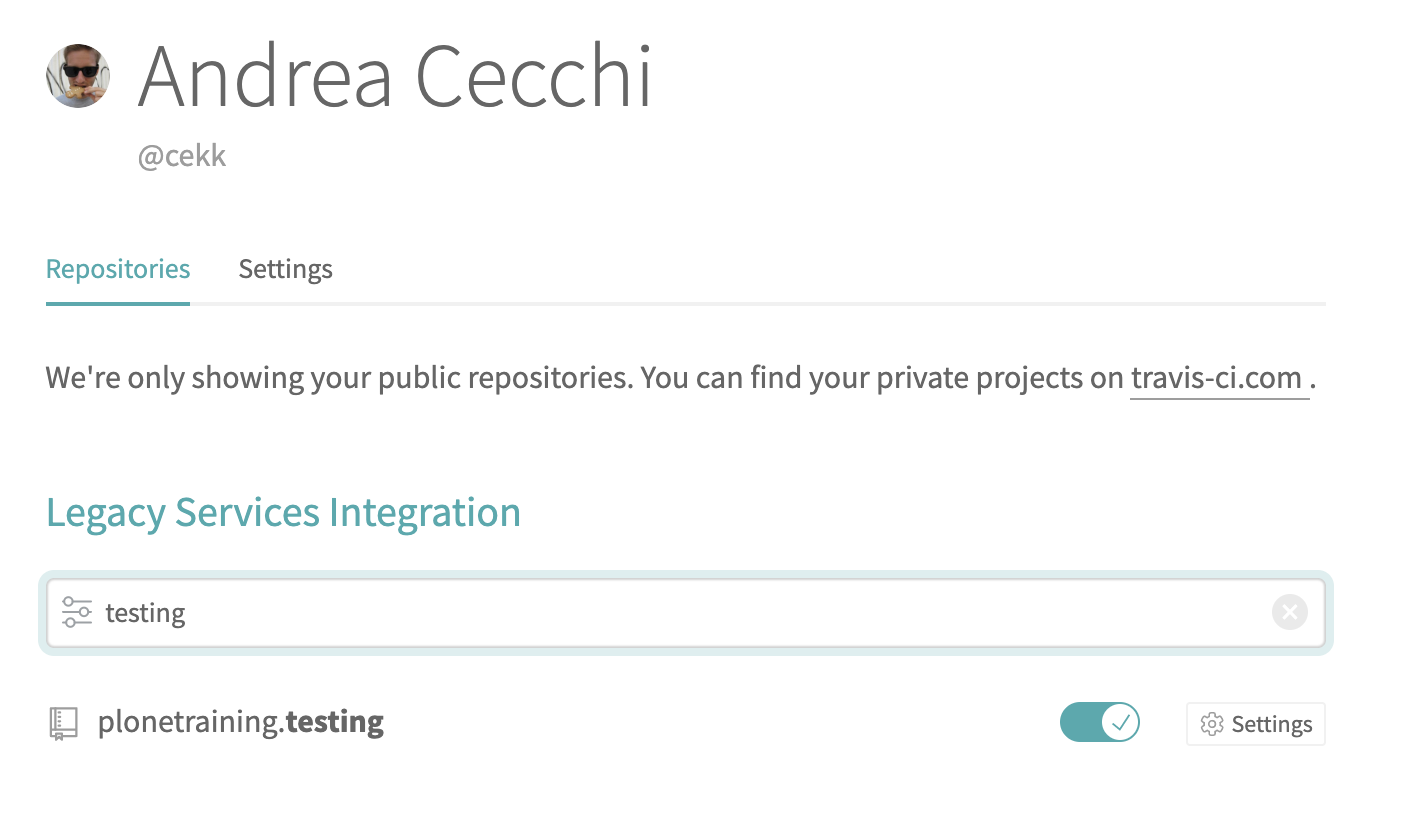 By default, Travis CI will run tests automatically for each push to the repository, including pull requests, and can also be manually triggered (but only for the master branch).

For this reason, to trigger the first test run, we make our first commit to the repository:

This action will trigger Travis CI hooks, and you can see something begin to run:

In this screenshot we can see that a new build has started with 4 parallel jobs. That's because the Travis CI configuration file was set to run tests for 4 different Plone versions.

While we wait the tests to be completed, let's see how to configure Travis CI.

The very first time that a test runs on Travis CI, it could take more time because it hasn't cached anything yet.

Travis CI integration works only if there is file in the repository named .travis.yml. This file contains all the configuration needed by Travis CI to run our tests:

Here we define some system information. For each triggered test, Travis CI instantiates a virtual machine and we can setup several options, such as:

Here we are selecting default Python (and virtualenv) version for our tests.

In our case we want to test 4 different Plone versions.

before_install, install and before_script are sequential steps called phases in which we can define actions to execute at a specified step.

before_install is usually used to install some system libraries or set up something before the actual installation.

ìnstall is the phase in which we install everything needed to run the tests (including running the buildout).

before_script is the phase immediately before running test scripts and could be useful for tweaking some system setups (such as enabling the X virtual frame buffer (Xvfb) to run Robot tests).

We are using an environment variable set in the build matrix ($PLONE_VERSION) to run the correct Plone version.

script is the phase in which we actually run the tests. By tests we mean not only the integration, functional, or robot tests that we previously wrote but also anything that can evaluate the quality of our add-on and can fail.

In our case, we are running two tests:

If all tests run successfully, we can also define some actions to perform after that, such as creating a coverage report.

See Travis CI documentation to see all the things that we can do after a job's success or failure.

Going back to our builds (they should have finished), if you ignored code-analysis reports on commits in your local repository (as we do), you will probably have seen that all your tests failed.

Clicking on a single job, we can see its console log, and we should see an error like this:

This means that the code-analysis test failed, and so that job has been marked as failed.

code-analysis is a buildout-generated script that provides static code analysis using different tools such as flake8, JSHint, and CSS Lint.

To check all the code in our repository, we need to run this command:

plone.recipe.codeanalysis also creates a git pre-commit hook that runs the above command on every commit.

The output is a list of things that need to be fixed, indicating the file name and line for each reported item.

GitLab (and BitBucket) have their own internal CI machinery, so if you have a project on GitLab, you only need to enable its CI/CD feature and provide a .gitlab-ci.yml configuration file.

This file has a syntax similar to that of Travis CI. You can find details in the online GitLab documentation.

tox is a command line tool that is a part of a larger vision: standardize testing in Python.

It is a generic virtualenv management and test command line tool you can use for:

Basically, tox does what a CI service does (running parallel test jobs), but locally.

To use tox, you have to install it:

After that, you need a tox.ini configuration file to configure everything you need to execute tests:

The most important part is envlist where we define a matrix of all versions of Plone and Python that we want to test. We can also provide a bash-like list of options like py{27,37}-Plone{52} if we want to run Plone 5.2 with Python 2.7 and Python 3.7.

Other parts of this configuration file are used to define setups and commands that tox will read and execute for each environment in the matrix.

You can run tox with this command:

tox will read the envlist matrix and execute commands for each one.

Only if all environments ran successfully will tox return exit code 0 (success). In this case you’ll also see the message congratulations :).

and then run only one environment with: